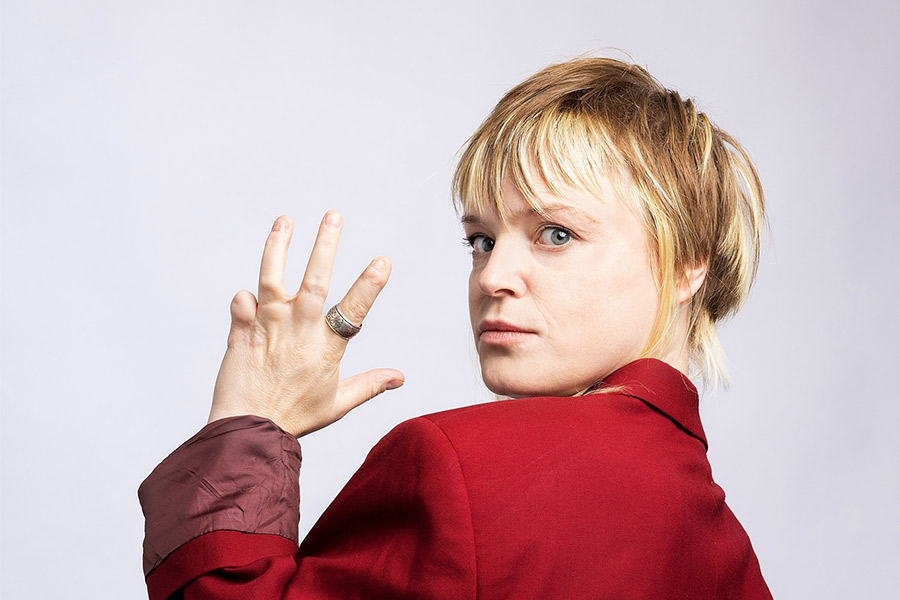 We are very excited to welcome Wallis Bird back onto The White Horse Sessions stage this Autumn.

The front cover of Irish born, Berlin based WALLIS BIRD’s new album features a black and white photograph of a hand. A cursory look might not reveal anything unusual, but it only takes a moment to recognise it’s no ordinary hand. In the shadows there’s a stump where the little finger should be, and something seems off about the other digits too. Some will understand its significance: they’ll have seen it strumming an upside-down, right-handed guitar, picking in unorthodox style, forming unconventional chords. The hand, you see, is WALLIS BIRD’s, and it’s there because, having spent much of her life trying to exist despite its restrictions, she’s reached a point where she recognises that, in many ways, it’s always been vital to her lived reality. With this has come a realisation of “who I am, what I am, and what I don’t want.” HANDS documents her subsequent process of change, and its consequences, with typically distinctive style, making it – hands down, naturally – one of the most honest albums you’ll hear at a time when honesty is at a premium.

If 2019’s exceptional Woman represented an ambitious state of the world address, HANDS – also known as NINE AND A HALF SONGS FOR NINE AND A HALF FINGERS – finds BIRD turning the spotlight onto herself, raising issues that are sometimes far harder to confront, only to emerge optimistic and whole. Among these are issues of trust, alcohol abuse, stagnation, self-censorship and self-improvement, some addressed through personal recollections of crucial moments accumulated over the last two years. Each, however, is delivered by a voice uncommonly blessed with joy, ingenuity and empathy.

Where its predecessor was bathed in soul music, HANDS adapts sounds from BIRD’s early childhood. Barring the intimately confessional ‘I’ll Never Hide My Love Away’, its songs are flushed with bright colours, many familiar from the 1980s and ‘90s. Its bookends are ‘Go’, whose smooth R&B inflections provide a neat bridge from the album’s forerunner, and ‘Pretty Lies’, its euphoric conclusion powered by forty chunky chord progressions. In-between, HANDS rarely pauses. The jubilant ‘What’s Wrong With Changing’ appropriates the rhythmic discipline of Janet Jackson’s Control, Rhythm Nation 1814 and janet., and ‘I Lose Myself Completely’ revels in Trevor Horn’s work, while the grinning ‘No Pants Dance’, written after witnessing neighbours celebrating lockdown’s end, would have delighted Prince, and ‘Dreamwriting’ – “a reminder to myself of one of my most favourite memories in recent years” – is full of warmth, lyrically and musically. ‘Aquarius’ dreamy chord changes and unexpected pedal steel, meanwhile, help unleash some of the prettiest instrumental sections 2022’s likely to enjoy, and there are pensive moments, too, not least ‘The Dive’, which describes a gesture BIRD treasures as “one of the most brave and romantic memories I own” and which wields a muted trumpet and Mediterranean guitars while its melody skips along dreamily as though through a summer meadow. If the sonic palette is different, then, HANDS is still defiantly, happily WALLIS BIRD. “HANDS for me is a symbol of humanity, connection and time,” BIRD elaborates. “Humanity because, as babies, a first sign of our knowledge of existence is through our connection when we grip another human’s finger. If we don’t have hands, are we lesser humans? No. Connection, because hands represent tactility and expression, a physical language that links our imagination and our reality with each other’s. Finally, time, because some of the first examples of civilisations were hand paintings on cave walls, some of those hands missing fingers, celebrating their story of existence.” HANDS’ themes, though, are obviously personal. “At 18 months old I fell under a lawnmower and cut all my fingers off,” BIRD states simply. “Four were reconnected. One was lost. This led me to relearn how to hold things, and, when the time came, to play the guitar differently. As a toddler, I remember seeing those cave pictures and being fascinated. What happened? How painful was that? This shaped me: I wanted to draw my heart like that, to celebrate time, scars, stories and humanity on a wall where others could too.”

As 2019 came to an end, BIRD found herself with time enough to reassess her relationship with her hand –and indeed herself – so decided to take a rare break. She’s released six albums since 2007, for which she’s won two Meteor Awards, Ireland’s annual music prize – mostly recently for Best Female Artist – and a prestigious 2017 German “Musikautorenpreis” (Music Author Prize), not to mention two further nominations for the Choice Music Prize, Ireland’s equivalent to Britain’s Mercury Prize. In addition, she’s racked up over a thousand shows during the past decade, earning a reputation worldwide for passionate, energetic, good-humoured concerts. She began her sabbatical by quitting alcohol, a decision at the heart of ‘I Lose Myself Completely’, and four days later, she recalls, “I went to Philipp Milner (producer / musician, Hundreds)’s house to make some music, and my world opened up like an orchid.” Subsequently, she details, the album “was recorded in fifty weeks, primarily in Philipp’s farmhouse studio in Wendland, my studio in Berlin, and Marcus Wuest’s in Sandhausen, where I’ve recorded all my albums.”

HANDS was completed with ‘The Power Of A Word’, a hushed showcase for shimmering synths and a notably ethereal vocal. At the heart of the track – as with so much of HANDS – is self-examination, change and acceptance. “Up until recently,” BIRD concludes, “I simply treated my hand as something additional, not primary to my story. But, during this pandemic, when everything in my usual life was scattered, I found myself wondering ‘Who am I? What am I? What story do I leave behind?’ My story had been one of stubborn ‘I can do it just as good as anyone’, but this new chapter in my life has been about letting go of over-controlling, handing things over to others, being comfortable with my surroundings and colleagues, and knowing I’m understood. Right now, I’m a passenger, a guest in my life, because the album has been so collaborative and so out-of-bodily written, almost hypnotically. And I love it!”

And it shows. So let’s see those HANDS in the air. After all, there’s a lot to celebrate here...

We are so happy to have Wallis back on The White Horse Sessions stage this Autumn. These will fly out the door! Get your tickets soon!

Please note refunds are available up to 24 hours before the scheduled date and time of gig.