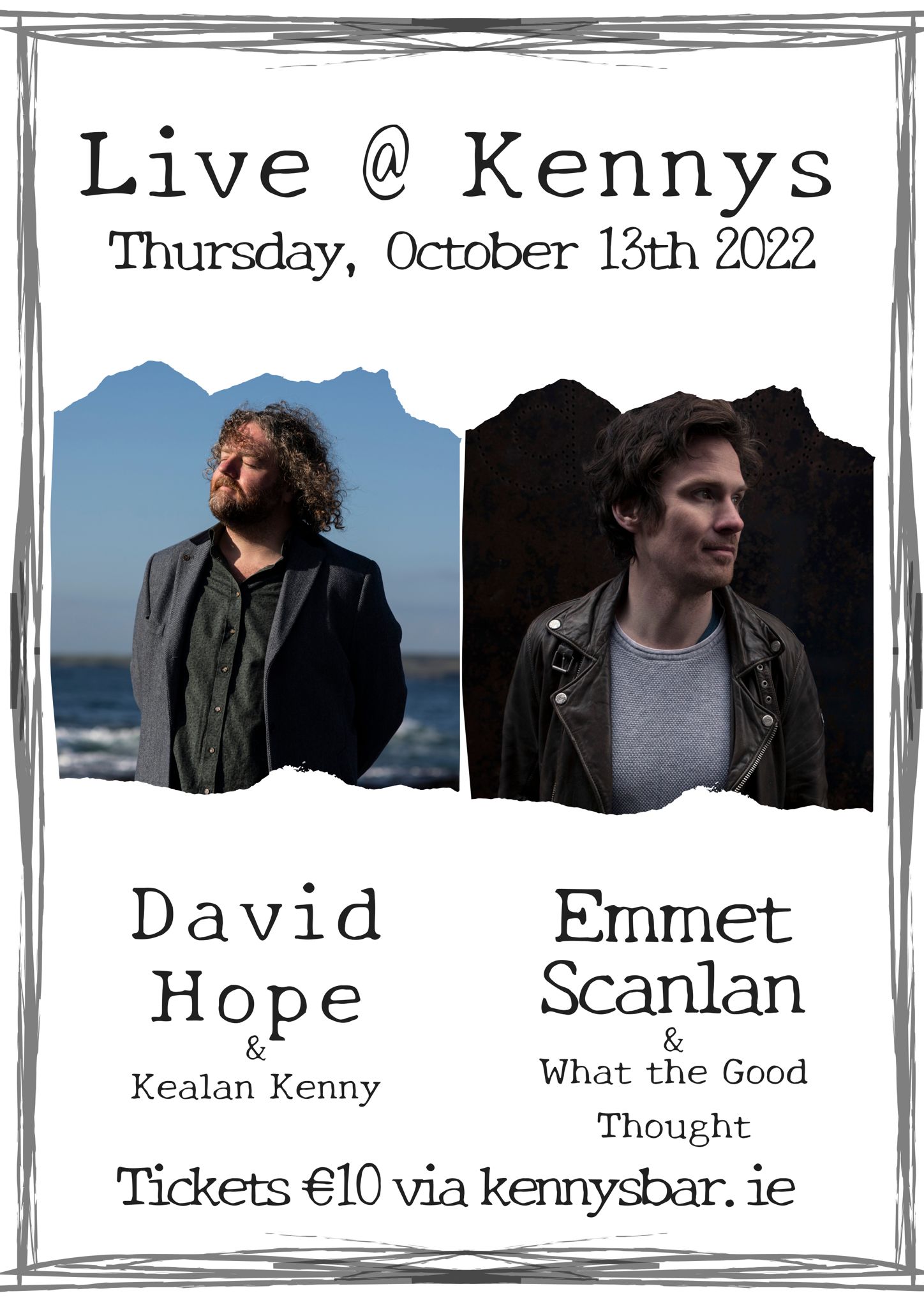 Clare singer-songwriter, David Hope kicked 2022 off with the two new singles, ‘Moon and back’ and 'Whiskey Mornings'. Both singles are from his forthcoming fifth studio album ‘...and the Sea’ which is out in September 2022. Having previously worked with Irish folk legends, Terry Woods and Declan Sinnott, Hope has collaborated yet again with legendary producer and drummer, Christian Best, on his new album.

…and the Sea’ is the fifth studio album release by Irish singer-songwriter, David Hope. Both lyrically and musically, this is the deepest dive that Hope has taken into his songwriting and recording. Through capturing a mix of raw emotional acoustic tracks and full band epics, this makes for his most complete album to date. The album was recorded and produced by Christian Best at Monique Studios, Midleton, Cork. The approach taken by Hope and Best to the album's production was to try and capture the performance of each song in as much of a ‘live’ way as possible. This was in an effort to be as true to each song, but ultimately to have an overall ‘Album’ sound, rather than a collection of individual recordings: -

“There are different styles and different inflections to the songs on this album, but there is definitely a thread that connects them from how we approached the recording process. I wanted a late night, close feel to the sound and I think between Christian’s recording style, the players who were part of the project and the songs themselves, we achieved that.”

Hope was joined for the recording sessions which took place in July - October 2019 and February 2020 by Steffi Hess from Switzerland on double bass and vocals. From Ireland, session musician, Kealan Kenny from Cork, features on electric guitar; alongside Darragh Keary from Limerick on piano and keys. Additionally, Chris McCarthy from Cork also makes an appearance on E bass. Christian Best lends his talents on drums and percussion, just as he did on Hope’s previous album ‘Tough Love’ (2017).

“I have been extremely lucky to work with many great musicians over the years, both live and in the studio. While the recording sessions for this album were some of the most personally draining and hard to deal with, from a musical perspective, they were some of my favourite times spent in the studio. The excellence of the musicians involved along with the mix of personalities and energies made for incredibly productive and genuinely fun recording sessions. I owe them a great deal.”

The first release from Hope in almost four years marks an evolution of his sound, of which signs were present on his last album, ‘Tough Love’ (2017). With the benefit of having time to flourish, both musically and lyrically, this collection of songs is Hope’s most accomplished work to date.

Hope has gigged and toured extensively in both his native Ireland and mainland Europe, averaging in excess of 200 shows per year. During this time, Hope has built a reputation as one of the very best live performers on the touring circuit today.
‘Tough Love’ (2017) built on the success of ‘Scarecrow’ (2013) which garnered extensive radio play and successive tours both in Europe and Hope's native Ireland. The first single from ‘Tough Love’, 'Christmas Day', was chosen as the RTE Radio 1 song selected for the European Broadcasting Union Christmas Music Project and featured on a playlist across all member states.

EMMET SCANLAN & WHAT A GOOD THOUGHT are set to tour their newest full band EP, due out in October 2022. Led by County Limerick songwriter, the act are described by Hotpress as a ‘blustering symphony of sound’. The band have members from Ireland/UK and Sweden and have toured Ireland, the UK and the USA and have played many stages including Electric Picnic and The Galway Arts Festival. #

Speaking about the forthcoming record, Emmet states ‘these are songs based on topics that are very close to me. They are songs about embracing the relationship with your hometown, or working through a very tough time with someone you hold dear, and about stepping aside so you don’t get in the way of yourself’

'A debut that makes considerable virtue of its scattergun song book….they sink deep beneath the skin of a song' The Irish Times.