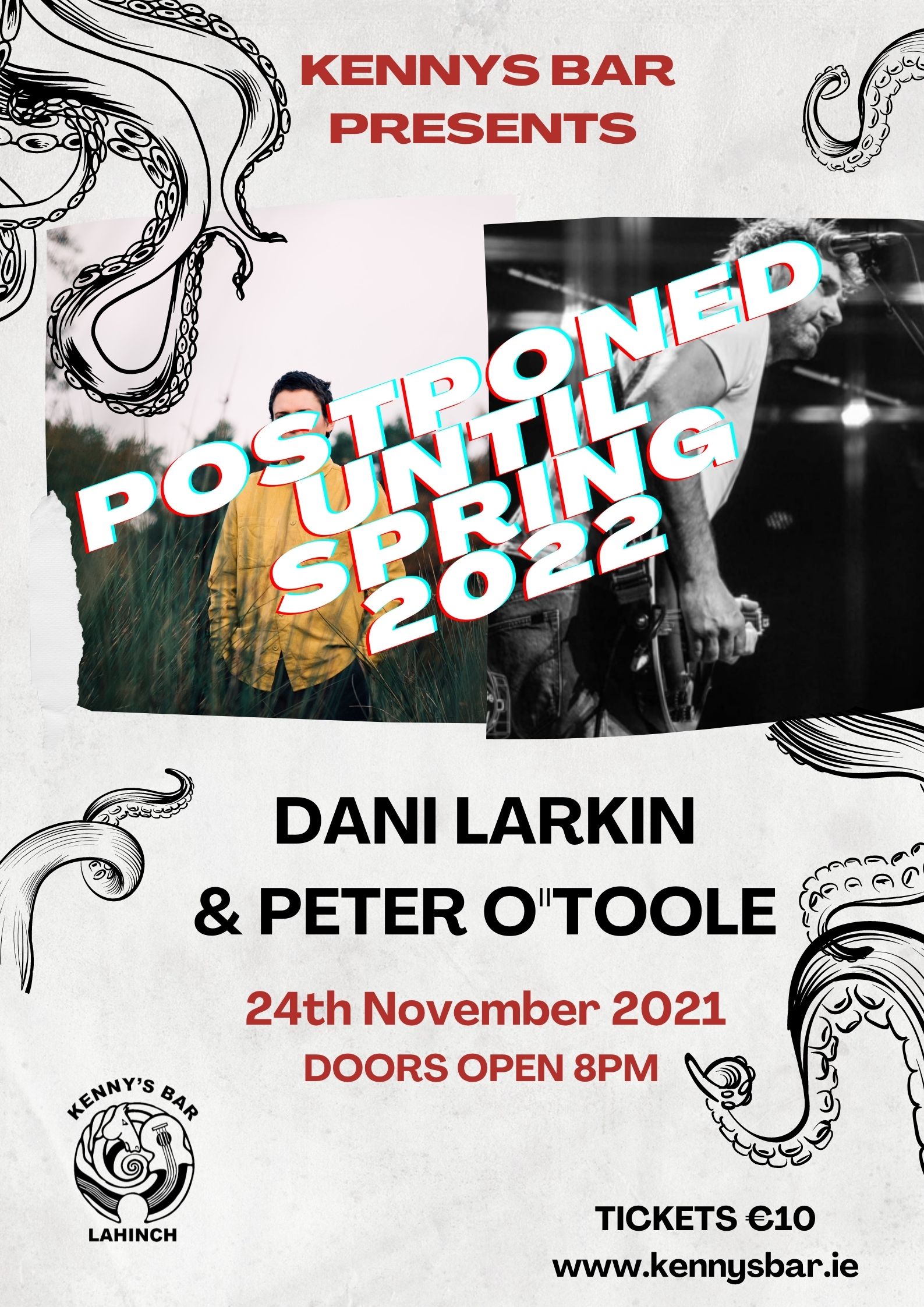 POSTPONED UNTIL SPRING 2022 - WATCH THIS SPACE -

Peter O Toole, born in Dublin, is a musician, composer, songwriter and producer. His latest album ‘Leaving White Cedar’ was released in 2020. A self taught musician and singer, he plays guitar, mandolin ,piano, banjo, recorder Zhong ruan and bouzouki. A founder member of  Hothouse Flowers, they broke onto the music scene in 1985 and continue to tour the living world.  In 1986 Hothouse Flowers released their first single, "Love Don't Work This Way", onU2's Mother Records label . Peter has played an integral part in evolving the distinctive sound that is Hothouse Flowers. Together they have released 12albums winning Gold Platinum and Silver Discs for sales worldwide. From 1989 till 2020 Hothouse Flowers toured in Europe USA, Australia, the Middle East, New Zealand, Tasmania and Japan, playing to live audiences from Glastonbury UK to the Opera House in Dubai. Playing with musicians such as the Rolling Stones, INXS, Bob Dylan, Van Morrison, Christy Moore, The Dubliners, Michelle Shocked, Tim Finn, Mike Scott, and Def Leppard. Their latest album ‘Let's do this thing’ was released in 2016.

Alongside his career as a performing artist with the band, Peter has pursued a solo career, song writing, performing music solo and in collaboration and producing music for artists such as John Spillane "Will we be brilliant or what" Album, Simon Carmody and Michelle Shocked (Peach Fuzz). Song writing and music composition for film includes; The Boxer and Borstal Boy as well as international films such as Ma première fois. Marie Castille. Peter has toured Ireland, UK, Europe, America, Australia, Hong Kong, and Singapore, playing bouzouki, guitar and  mandolin. Working with dancers and musicians from Ireland, Nigeria, India, Ghana, Finland, Indonesia and Greece, as the Fabulous Beast Dance Group in the stage show“ Rian, for which they were awarded New York’s prestigious Bessie award.

The recent cancellation of all live performances in 2020, provided time to create a new album, writing recording and film making narratives around his music for diffusion on tv and digital platforms, connecting with audiences in a new way. Peter was awarded the Arts Council Covid Grant, was chosen to be a 2020 Visionary for Culture Ireland, was awarded the 2021 Artist Award from Tipperary Arts Council and made a few short films including a piece funded by Tipperary County Council about the Men's Sheds of Tipperary and beyond.

Off the back of her Folk Alliance International live debut this past February, Ireland’s most exciting new alt-folk artist Dani Larkin plans to release her debut album Notes For A Maiden Warrior on June 18th 2021. The long-awaited debut album makes its final voyage, containing a collection of 10tracks including reimagined album versions of popular tracks such as ‘Samson & Goliath’, ‘Bloodthirsty’ and ‘The Mother Within’ and promises to be one of the most exciting contemporary folk albums this year.

Along with the announcement of Dani’s debut album Notes For A Maiden Warrior, a headline Irish tour is announced including The White Horse Sessions stage here at Kenny's Bar. The album is centred around the concept of lessons on how to be a warrior, how to create change in this world by learning from stories of old and from other realms, and how to navigate life- love, death, suffering, pain, strength and kindness. It is not intended to be instructional; it is as a set of notes in song form. Recorded in Halfbap Studios, Belfast and co-produced by George Sloan this debut album Notes for A Maiden Warrior formally cements Dani Larkin’s arrival onto the folk scene, and establishes herself as a contemporary folk artist to take notice of.

This album is being self-released digitally as well as physically on vinyl. Available to pre-order directly from Dani Larkin’s website www.danilarkin.com.